3 Wrong Ways to Use 360-Degree Assessments

In the vOICe on October 28th, the author wrote “Over-Assessed – How to Select the ‘Right’ Assessment.” The author defines two fundamental components to keep in mind when choosing the “right” assessment for your employees and organization. The second is what caught my attention – that is,

To actually understand what assessments do and don’t do.

Many organizations have implemented or plan to introduce 360-degree feedback as an assessment tool in their organization. The 360-degree feedback is a system or process in which an employee or multiple employees receive confidential, anonymous feedback from people who work with them (peers), directly for them (direct reports) and supervise them (boss). They are, in fact, very powerful development tools when used appropriately. When used with the wrong intentions or with little understanding of the 360-degree instrument, they can have the potential for disaster. 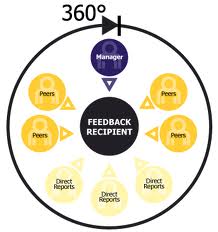 There are three WRONG ways to use a 360-degree assessment:

It should also be noted that by design, 360 degree feedback reflects subjective feedback. While it gives a much more rounded view of a person (vs. just a boss / self review), by its very nature, 360 feedback is based on the rater’s PERCEPTION of a person’s behaviors and skills. While perception tends to reflect one’s reality, it does not always accurately reflect the person’s intentions.

What system(s) is best for your organization? Tell us about your experience using 360-degree instruments or receiving a 360-degree feedback?