Recently on a trip from Ireland to the OI Partners Conference in Las Vegas, I learned some key rules from the card tables that could prove useful if you are currently job seeking. 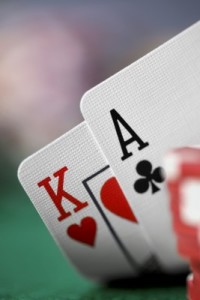 Learn how to play the game.

I first visited Vegas with very little knowledge how to play the tables. Like anyone setting out in search of a job, I felt nervous that I didn’t have all the insider knowledge or fully know the rules. The first thing I did was to observe and spent most of the first evening standing behind players learning how the game was played.

Find the game that best suits you.

I eventually decided that Blackjack was the game that suited me. What I didn’t know was when to stick and hold and when to ask the dealer to hit. The first hands I played, I felt and looked like a novice and knew I was leaving myself exposed. Job seekers often feel this way when they don’t have all the skills and knowledge required to compete in the jobs market. Yet as I continued to play, bit by bit, I learned more.

Find a mentor to guide you.

I noticed one particular dealer who seemed to converse a lot with the players. He was, in fact, teaching the new players the rules of the game. His game was more fun and held more hope for me. As the games progressed, I asked more and more questions of my new card dealer mentor, Larry. He gave me great advice and looked out for me more than others.

Just one mentor is not enough.

The rules of the game are that the dealer moves on after about 30 minutes and a new dealer is introduced. This can mean a culture change at the table that may not always be positive. This is when you leave the table and seek out new pastures where other, more helpful dealer mentors may be working. Similarly, it is foolish to depend on one person to mentor you into your next job. What I also noticed, was that when other players won hands they would tip the dealers occasionally. When I won some hands, I too started to tip which helped in building our relationship. It takes time to build relationships and you have to look after your mentors, or they will feel you are just using them for information.

You don’t win every hand.

Dealer Larry told me not to get too disappointed when I lost a few hands, as the table wins too! The laws of the game are such, you can’t win them all. Also there are other players in the game and if you try to be too selfish, this actually means that other players lose out too. In your job search, you won’t succeed at every interview. Some jobs are not meant for you.

Don’t go in over your head.

I also learned from those who punted heavily expecting to win big early. They didn’t last long in the game and burned out fast becoming disappointed that the odds were against them. I played the minimum $5 tables and played $5 hands. Some guys sat down playing $20 hands and blew up fast, losing a couple hundred dollars in 10 or 15 minutes. They started a marathon at sprint pace as so many job seekers do, placing all their hopes on a few key big contacts or companies where they feel they have a chance. The game of job search is won by persistence over pace.

Have fun while playing the game.

The beers came for free to the tables and made for a fun atmosphere. I had fun, played the game I liked, didn’t drink all of the free beers offered and kept my head. I spent hours engaged in the hands I played. When I coach people through job search, they often take it too seriously. Yes it is an emotional time, but you must treat job hunting as a time out to learn and hone new skills and knowledge.

In conclusion, what did Vegas teach me about job search? It won’t all go to plan and treat it as such. You will make mistakes, you won’t win em all, keep your head, ask lots of stupid questions, seek out mentors who know the game and learn from them. Lastly, remember to make notes how to play the game and who helped you because it is likely you will need to play the game of job search again at some point in the future. Because as we know, every job is temporary today but the skills of job search are required on a permanent basis.

John Fitzgerald is executive career coach, MD Harmonics, and managing partner, OI Partners Ireland. He can be contacted at +353 (0)61 336136.